Upcoming concert events at MGM Grand in Las Vegas are listed below. Click on the 'Buy Tickets' link to be redirected right to Ticketmaster where you can buy tickets! Click on the links in the event name to check out our full guide for that event.

Grab an awesome parking spot before you head to the stadium! Use the SpotHero widget below to select your event, view nearby parking to the stadium, and purchase your parking pass in advance.


MGM Grand Nearby Hotels To Stay At

The MGM Grand hotel in Las Vegas is split into multiple sections and brands. They are all listed online and are available to stay at with the exception of “The Mansion”. It can be a bit confusing if you aren’t familiar, but we’ve broken it down below.

Located on the MGM Grand properties are the following building:

For information about the MGM Grand Las Vegas hotel and other nearby places to stay, check out the list below.

Listed below are all of the hotels around MGM Grand in Las Vegas. Enter your dates and the map will automatically update with live hotel prices for your stay!

Click on a hotel to be transferred to our sponsor, Booking.com. If you've never used them before, they are 100% guaranteed to have the best prices and selection.

There are roughly 24 MGM Grand restaurants to pick from if you are staying at the hotel or looking for a place to eat. These restaurants range from casual eats up to fine dining.

We’ve summarized all of the restaurants at the MGM Grand in Las Vegas below for your review. More detailed reviews and information are coming soon!

Check out our Las Vegas happy hour food and drink guide for information on when you can get some great deals at the restaurants below.

Some of the best nearby restaurants are listed below. Click on a link for more detail.

Listed below are the top five rated restaurants in Las Vegas within 2 miles (3.2km) of MGM Grand according to Yelp.

The MGM Grand is home to some of the top amenities and attractions located on the Las Vegas strip. Whether you are looking to see a Vegas show inside one of the MGM’s many stadiums, watch a special Las Vegas residency, or take part in one of MGM Grand’s specialty attractions, there is something for everyone to enjoy.

The following shows can be found at MGM Grand Las Vegas:

Other attractions located on the MGM Grand grounds (or affiliated with the hotel) are as follows:

MGM Grand Know Before You Go

Below are some of the most asked questions about the MGM Grand Resort in Las Vegas. If you have anything you’d like us to answer, comment below or get in touch with us on social media!

Yes, all MGM Grand pools are heated and open all year round.

Is the MGM Grand non smoking?

Smoking is not permitted in any MGM Grand hotel room. Smoking IS permitted in the MGM Grand casino floor, although there are designated areas where smoking has been prohibited. Always pay attention to signed in the casino floor which give you information on smoking.

For all areas where smoking is not permitted, that includes electronic cigarattes, vaping, and other smoking products.

The MGM Grand parking garage is located on the south east corner of the property by Koval Lane and West Tropicana Avenue. There are different policies and pricing for hotel guests and visitors as follows:

The latest renovations to the MGM Grand in Las Vegas took place in 2018 when a new 250,000 sq ft was added to the resort’s convention conference center. In early 2019, MGM announced plans to redevelop the resort’s entrance on Las Vegas Boulevard to provide easier pedestrian access. The redeveloped area will include restaurants and retail space. There are future plans to redevelop the hotel’s entrance on Tropicana Avenue as well .

The MGM Grand rooms were last renovated in 2011, bringing everything in the main tower up to date with a new modern contemporary feel.

What is the MGM Grand Signature?

The MGM Grand Signature suites are three towers built on the MGM Grand lot in the old location where the MGM Grand amusement park closed in 2001. The Signature towers are full of suites and bigger rooms to stay in. It opened in 2006. One of the nice perks about staying at The Signature is that each tower has its own private pool area, meaning that it is less crowded than the general MGM Grand pool complex.

What is MGM Grand stay well?

Stay Well is a specialized branding given to most hotel rooms at the MGM Grand in Las Vegas. It is a set of individual features focused on providing positive health impacts to all hotel guests. Stay Well includes the following features:

When is check-in/check-out time at the MGM Grand?

Where is MGM Grand on the strip?

You can view it’s exact location below. 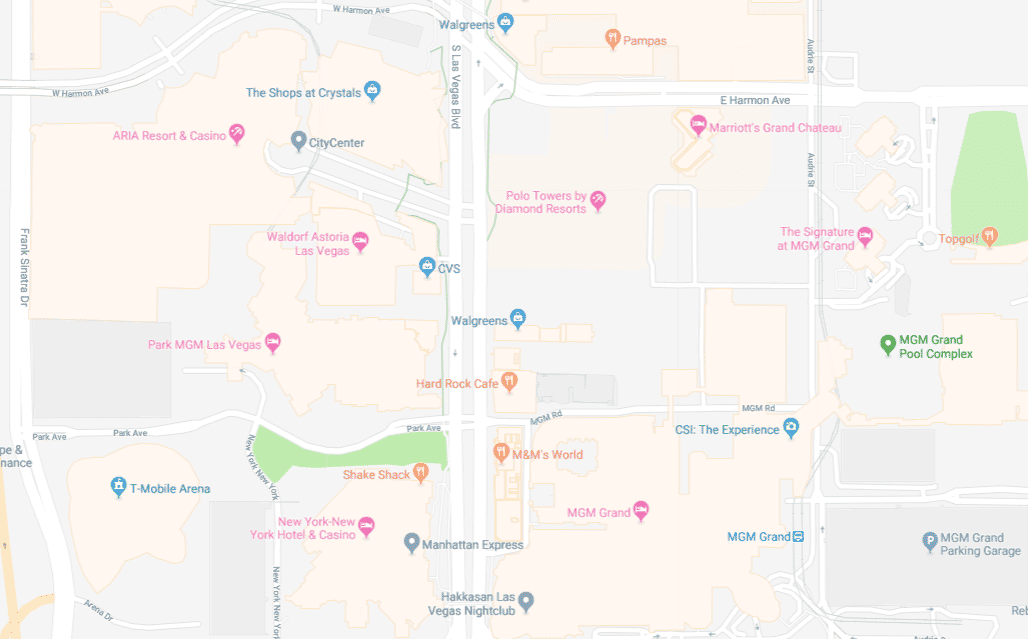 Where is the gym in the MGM Grand?

The MGM Grand Fitness Center is part of the Grand Spa. It is located just past The District, right beside the entrances to the Grand Pool and The Signature properties.

Where is Topgolf at the MGM Grand?

Topgolf is located right beside Wet Republic inside of MGM Grand. When you walk through The District and head down the escalators towards the Gran Pool, you will exit through a set of glass doors to a walkway towards Wet Republic and Topgolf.

Which tower of the MGM Grand is best to stay in?

There are two main room styles inside of the MGM Grand – the West Wing and the Grand Towers.

The West Wing rooms were built for the original MGM Marina hotel in the 1980s and are smaller rooms. However, they have a closer proximity to the Las Vegas strip.

The Grand Tower rooms are more spacious with bigger windows looking out to below. As well, tower rooms have private bathrooms instead of the West Wing, which is semi-private.

Who owns the MGM Grand?

The MGM Grand is owned by MGM Resorts International, an American hospitality and entertainment company. It is a publicly traded company on the New York Stock Exchange with the ticker MGM.

Billionaire investor Kirk Kerkorian and his Tracinda Corporation own about 39 percent of the entire company.

Will the MGM Grand hold my luggage?

Yes, the MGM Grand Las Vegas will hold your luggage after check out until it is time for you to leave the city. This service is offered for free to hotel guests who are checking out. A tip to the bell-boy in charge of handling your baggage and bringing it outside at your designated time is appreciated.

Did we miss any MGM Grand tips in our guide? Comment below if you have any further information to share!