Avenged Sevenfold emerged with a metalcore sound on the band’s debut Sounding the Seventh Trumpet and continued this sound through their second album Waking the Fallen. However, Avenged Sevenfold’s style had evolved by the band’s third album and first major label release, City of Evil, into a heavy metal and hard rock style. The band continued to explore new sounds with its self-titled release and enjoyed continued mainstream success before their drummer, James “The Rev” Sullivan, died in 2009. Despite his death, Avenged Sevenfold continued on with the help of drummer Mike Portnoy (Dream Theater), and released and toured in support of its fifth album Nightmare in 2010, which debuted on the top spot of the Billboard 200, Avenged Sevenfold’s first number one debut.

In 2011 drummer Arin Ilejay joined the band on tours and recording. Avenged Sevenfold’s sixth studio album Hail to the King, which was released in 2013, marked the only Avenged Sevenfold album featuring Arin Ilejay. Hail to the King charted as number 1 on the Billboard 200, the UK Albums chart, as well as the Finnish, Brazilian, Canadian, and Irish charts. In late 2014 Ilejay left the band, and was replaced by former Bad Religion drummer Brooks Wackerman, but wasn’t revealed as his replacement until in 2015 the band announced Ilejay’s departure. The band surprise-released their seventh studio album titled The Stage on October 28, 2016, which debuted as number 4 on the Billboard 200 chart in the US. The Stage is their first conceptual album and it marked another stylistic change for the band, moving towards the progressive metal sound.

Avenged Sevenfold End of the World tour dates and locations are listed below! Use the links under the "Buy Tickets" heading to purchase your Avenged Sevenfold seats from Ticketmaster, SeatGeek, or StubHub.

Grab Avenged Sevenfold VIP packages for their End of the World tour today! Get in touch with us on social media or comment below if you have more information.

THE ‘A7X’ EXPERIENCE
– One (1) general admission pit ticket -OR- One (1) premium reserved ticket in the first ten rows to see Avenged Sevenfold live
– Early entry
– Invitation to The Paradigm Lounge – an exclusive pre-show lounge experience curated by A7X including: Admittance to ‘The Stage’ – an immersive experience offering the opportunity to play Avenged Sevenfold’s instruments, take pictures with their memorabilia, view exclusive items from throughout the band’s history
– Complimentary snacks
– Private cash bar with one (1) drink ticket*
– One (1) copy of ‘Unholy Confessions’, an exclusive A7X tour book featuring a retrospective of the band’s career including a collection of never-before-seen photos, with a forward from Avenged Sevenfold
– Merchandise shopping opportunity before general doors
– One (1) commemorative laminate
– Dedicated venue entrance
– On-site experience host
* Local liquor laws apply

THE ‘HIGHER’ SEAMLESS PACKAGE
– One (1) general admission pit ticket -OR- One (1) premium reserved ticket in the lower bowl to see Avenged Sevenfold live
– One (1) copy of ‘Unholy Confessions’, an exclusive A7X tour book featuring a retrospective of the band’s career including a collection of never-before-seen photos, with a forward from Avenged Sevenfold
– Dedicated venue entrance
– Dedicated check-in staff


Avenged Sevenfold Setlist For End of the World Tour

All Avenged Sevenfold presale codes for the End of the World tour are listed below. Check out the Ticketmaster or StubHub pages for this tour to find out the onsale date and time for tickets.

Save money by buying your t-shirts and artist merchandise before you go to the show! Check out the most popular Avenged Sevenfold merch on Amazon below. 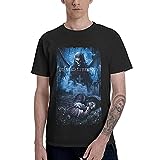 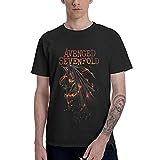 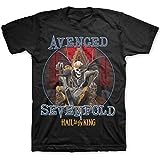 Discuss the Avenged Sevenfold End of the World tour below!