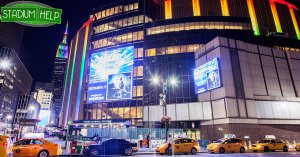 LOOKING FOR THE BEST US CONCERT VENUES 2018 HAS TO OFFER? WHY NOT MAKE IT AN INCREDIBLE YEAR AND HIT EVERY ONE OF THEM? WHETHER YOU CHOOSE TO GO TO ONE OR ALL OF THEM, WE GUARANTEE THAT YOU’LL MAKE SOME INCREDIBLE MEMORIES AND HEAR SOME GREAT MUSIC WHILE YOU’RE AT IT!

There are concert venues galore to choose from all around the US, but when it comes to stadium concert venues, these are a few of our favorites that you don’t want to miss out on! Whether you are heading to New York, Chicago, Brooklyn or Tennessee, you can be sure that these five stadiums will be holding an incredible event so long as you have those tickets ready. Just be sure to log in or pick up the phone and call your tickets in as soon as possible if you want the best tickets they have to offer!

One of the most highly rated stadiums, Madison Square Garden was opened on February 11, 1968, and has a capacity of 20,789! Home to the New York Knicks and the New York Rangers, it’s also a great location for concerts, In the coming months, MSG will host a number of big names in music including Bon Jovi, Billy Joel, Journey and Def Leppard, Hall and Oates with Train, Imagine Dragons, Harry Styles, U2, Sam Smith, Radiohead, Foo Fighters, Beck, Panic at the Disco, Smashing Pumpkins, Rod Stewart, Shakira, Paul Simon, and Eric Clapton.

If you’re looking to catch one big concert this year, Madison Square Garden would be a great place to do it because it’s not only an awesome stadium to visit, but they have some of the biggest names in music coming this year! Looking for somewhere to stay while you’re visiting Madison Square Garden? The Hilton Times Square is a favorite of ours!

Another of the greats when it comes to stadiums that are fabulous locations for concerts is Fenway Park! Opened on April 20, 1912, Fenway Park has a capacity of 37,731! Home of the Boston Red Sox, it’s another amazing location to check out some of the biggest names in rock. In the coming months, Fenway Park will play host to the Zac Brown Band, Luke Bryan, Foo Fighters, Jimmy Buffet, Billy Joel, Journey & Def Leppard, and Pearl Jam!

If you have a few days to spare in the coming months we advise not only dropping by for one of the concerts above but sticking around for a little baseball too! Not sure where to stay when you’re visiting Fenway Park? The Verb Hotel is a great choice, but so too is the Residence Inn by Marriott Boston Back Bay/Fe, the Westin Copley Place Boston, the Hotel Commonwealth, and The Liberty.

Another popular baseball field for concerts is Wrigley Field! Opened on April 23, 1914, this is one of the oldest concert venues on the list, but still, one that you don’t want to miss out on visiting! Wrigley Field has a capacity of 41,649 and is home to the Chicago Cubs! Many people aren’t aware that Wrigley Field is also a popular stadium for music events and in the coming months, you can expect some big names to drop by! Included in the music lineup for Wrigley Field in the next few months are Jimmy Buffet and the Coral Reefer Band, Def Leppard and Journey, Foo Fighters, Pearl Jam, Luke Bryan, Billy Joel, and Fall Out Boy.

From July through to September, you will have plenty of big-name concerts to choose from if you head over to Wrigley Field, but we definitely recommend checking out Jimmy Buffet and Pearl Jam! Not sure where to stay when you’re visiting the iconic Wrigley Field? We recommend Hotel Zachary at Gallagher Way, The Drake, or one of the many Air B&B type rental options – there are more than you can count, just be sure to read reviews first!

Barclays Center in Brooklyn, New York opened its doors on September 21, 2012, and is part of the Pacific Park business and residential complex in the area. Overall, the Pacific Park project will cost a total of $4.9 to build! Barclay’s Center has a capacity of 19,000 and is home to the New York Islanders, The Brooklyn Nets, and the LIU Brooklyn Blackbirds. In the coming months, visitors to Barclay’s Center will have the opportunity to see concerts held by Depeche Mode, Paramore and Foster the People, Sam Smith, Shania Twain, Chris Brown, Bruno Mars, and Nick Cave and the Bad Seeds.

Barclays Center may be a newer stadium on the block, but this year they are hosting some of the biggest names in music.  If you’ve never checked out Barclays Center for yourself, then it’s the perfect time of year to do it! Not sure where to stay while you’re down there? Check out some of our favorites!

The Bridgestone Arena was built in Nashville, Tennessee back and they opened their doors on December 18, 1996. Home to the Nashville Predators, the Bridgestone Arena has a capacity of 20,000. Over the next few months, visitors to the Bridgestone Arena will have the chance to catch the following faces in music! The Foo Fighters, Five Finger Death Punch, Justin Timberlake, U2, Harry Styles, Paul Simon, Justin Timberlake, U2, Sam Smith, Imagine Dragons, Kesha and Macklemore, The Smashing Pumpkins, Rod Stewart, Sugarland, Keith Urban, Def Leppard and Journey, Fallout Boy, Chris Young, Maroon 5, and Bruno Mars!

Will you be in the Nashville, Tennessee area this summer? Then make sure that you call ahead and get those available tickets ordered so that you don’t miss out on one second of the hottest musicians of the summer! While you’re there, make sure to check out the mural painted by country music star Brad Paisley. Not sure where to stay? The area has some really great hotels with views that most hotels can only dream of! Check out the Renaissance Nashville Hotel, the Omni Nashville Hotel and the Sheraton Nashville Downtown, you won’t be disappointed!